The World after Deathrite Shaman

- Juli 25, 2018
He was the core of so many decks. Often called the mini Planeswalker. He was strong, no doubt, but what will the ban do to Legacy?
I never had the feeling that there would be an overpresence of Grixis Delver and/or Czech Pile and to be honest, there was nothing more fun to us to play Deathblade against Czech Pile.
But now, both decks are gone.
People told me I should leave me local meta and play some real tournaments everytime I said that I don't see many of these decks. Well, driving a whole day through Europe, several hundrets of miles to play an event with over 300 players is not enough? I don't need any advice from players online who wants to tell me how to do that or the meta is like this. I make my own experiences and my own conclusions.
So I was in Hamburg, Germany, in May this year. Played 2 times against Czech Pile, didn't saw any Grixis Delver around or at the top tables. There wasn't even a deck in the top 8 which relied on the Shaman; 3 Turbo Depths, 2 Red Prison, 1 Belcher, 1 Elves, 1 Miracles. Okay, Elves plays Deathrite Shaman for sure but the deck doesn't need it at all and will exsist after the ban with just minor changes.
But there were Grixis Delver and Pile decks around, in total numbers, out of 260: 24 Grixis Delver and 14 Czech Pile.
But what is the format now? Well, nothing, at the moment. The ban is two weeks old and everything has to settle down. Death and Taxes is on the rise.
While I'm writing this, many players are in Prague and play one of the biggest events in Europe.
I have to find my deck now, probably Miracles, after I can't play my trademark anymore; Esper Deathblade. I enjoyed my biggest moments with this deck; my victories and a little bit of fame. It was a nice feeling when people come up to me and asked:"aren't you the Blade player from Prague?". It put a smile on my face and a with a little uppish feeling I could answer:"yes". I earned a bit of respect of a few people and after the next 3 top 16 they were still up and wanted to know how I fight my way up.
I'm not angry about the ban, not really sad, but I don't see a reason. I won't stop playing at all. But I share a lot of memories with this card, with this deck...
Discussion 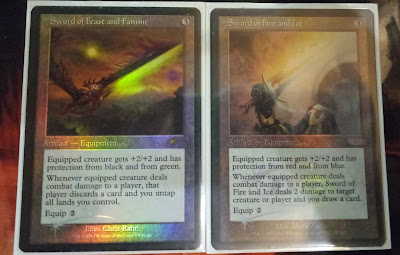 - Juli 31, 2018
What is Werewolf LockdownWhat cards does the deck play?How does the deck play/work?The deck's place in the metaWhy would you play it over other Stompy decks?
What is Werewolf Lockdown?
Werewolf Lockdown is a stompy deck which forces the opponent out of the game with hatepieces like Chalice of the Void, Blood Moon and Trinisphere. Once your opponent isn't able to cast any spells or just a few ones of the whole deck, you drop a Werewolf which is a 5/5 creature when it is transformed.
The stompy strategy isn't new and featured in many decks: Eldrazi (Stompy), Mono red Prison/Dragon Stompy, Soldier/Thalia Stompy, Steel Stompy...
They have all a few things in common: They play expensive (strong) creatures, Planeswalkers and other win conditions, mostly starting with a cmc of 3.
I want to give credit to "Afro Dave" who showed (t)his deck online in "Inside the Deck". Link to the video here.

What cards does the deck play?
If you followed the link to the video yo…
Mehr anzeigen